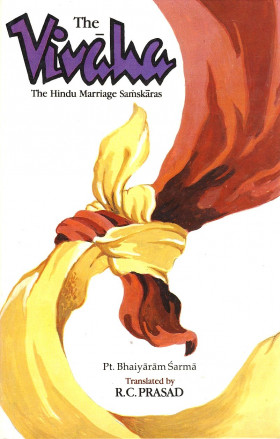 Share:
Ceremonial rites and rituals occupy a place of utmost importance in the life of a devout Hindu. In fact there are no vital actions-birth, initiation, marriage, death etc.-which can be allowed to the performed without its appropirate rite or samskara. The number of samskara has been fluctuating but was finally fixed at sixteen. Marriage is the most important and elaborate out of these sixteen samskaras.

The mantras used in the nuptial rites being in Sanskrit are beyond the comprehension of not only the average Hindu but even the common priests entrusted with the duty of conducting the rituals. To overcome this difficulty the present book was originally prepared in Hindi and is now translated into English with the mantras etc. romanized for the benefit of those who do not have adequate knowledge of Hindi, for example especially those whose forefathers had migrated to remote countries during the last one hundred years or so.