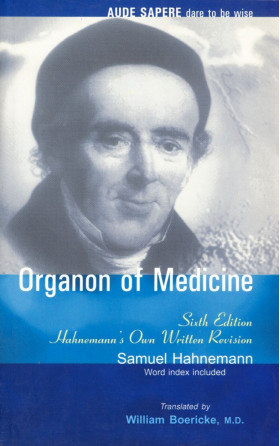 Share:
"The Organon" developed slowly out of Hahnemenn's thinking and experimentation. "The Organon" went through six editions. The sixth edition was ready for print in 1842, but Hahnemann died before it could be printed. Just before the turn of the century, Drs William Boericke and James Wiffiam Ward paid $1,000 to purchase "Organon" from the Boenninghausen family. The sixth edition finally appeared in print in Germany in 1921 and in the United States in 1922. The edition was typeset around 80 years ago. The modern reader finds it difficult to read and go through the book. For the past few years the publishers has been constantly requested to reproduce this treasure in a manner which is consistent with modern books. To make the book user-friendly it has been refurnished. The positive changes we made are as follows: Footnotes which were earlier given at the bottom were difficult to find and read. In this new book, they have been incorporated into the main text at the intended places in brackets but in smaller fonts. This makes the reading and understanding of "Organon" easy and effortless. Lastly but very importantly a word index of 15 pages has been added by Dr S S Patil at the end of the book which makes it very easy to find the required portion of the text.